There will from be established a committee to follow the process, with the head of Culture Bente Høegh and the head of planning .

During the 2005 biennial ’City Living - Living City The 6’th European Biennial for Towns and Town Planners’ as a part of the street creativity session, created ’The Cinescape Street Creativity Charter’ which is a charter for street creativity in Europe. The Charter was presented at the biennials last day and discussed in plenum with Jan Christiansen, City Architect in and  Christer Persson, Senior Adviser in Malmö and Frank D’hondt Geograf og Urban Planner.

The Cinescape; Making the borders soft and Fuzzy, Street Creativity Charter is attached to this document.

I wish to in cooperation with Furesø Municipality to work with the concept presented in the charter and use it to create a close connection between the to main towns in Furesø Municipality Værløse and Farum more precisely a central square in each town. The two squares are Kulturpladsen in Farum and Kulturtorvet in Værløse. is a part of the metropol.

Each of the two squares has a culture house connected to it. Our project will have as starting point the culture house and the squares and the nearby streets.

When the installation starts poet/artist will have created a web-portal and placed material from various video artists, other visual artists, sound artists, composers, musicians and poets .

An idea could be to project and play MultimediePoetry from FilmPlatform www.filmplatform.dk/mpoesi.html at the start of the installation.

The two squares will be video filmed and projected upon each other by video cameras placed behind window glass (to avoid vandalism) and recorded through direction oriented microphones. In other words the two squares will be present in each other. When you are at one of the squares you can see and hear a reflection of the other square. You can see and here a reflection of people, music, pictures and poems there is present at the other square. If you want to take a bike, car or train to the other square, to fully be a part of the other square, it’s easy to do it. Downtown Værløse and Downtown Farum are only away from each other, with all the mentioned traffic connections between them.

Through the web-portal it will be open for people to add material through their activities on the squares, through the use of video cameras and microphones there have been placed or by uploading materials to the community web-sites by mobil phones ( sms, mms etc.) , lab tops,  computers in the nearby libraries.

By the help of mailing lists people in different parts of will get passwords to the community web-sites. Password will also be distributed at culture houses and libraries. People can give the passwords to everyone they want to. Everyone who directly or through local community has a connection to the urban spaces can in that way get access to place material on the community web-sites and in that way project and play material in the urban artscapes at the squares. Everyone in the world can follow what is happening in Urban Artscape.

People can be in the urban space, in the artscapes at the two squares when they get ideas and upload material, but they can also be in their private space and use their home computer to cross the borders from their private homes to the public urban space.

The local people and people who get in contact with the area decide how the installation will develop, with the degree of restrictions and control there always will be in a public space.

Every password will be individually tagged, to every password will there be connected a name and an address. If there have been a non acceptable behavior associated with the use of a specific password, this password will be blocked. Through a close contact with the juridical advisor for Furesø Minicipality it will be secured that the law is not broken.  The juridical aspect of Urban Artscape is also groundbreaking. There has not been a semi permanent (two month) installation/intervention of this kind before in public urban space.

To fuse the virtual reality in the internet and the outer reality in urban space is new, to create a semi permanent augmented reality in this way is new. Urban Artscape is among the first project of what the IT world is calling web 2,0.

In other words Urban Artscape create communication and contact across borders; between the private and the public space, between the virtual and physical outer reality and between the different cultures there is at Kulturpladsen in Farum and Kulturtorvet in Værløse.

The installation will be semi permanent (two month ) Its important that the installation stretch over some time, because an important element in the concept is the social aspect, how the cultural codes in daily life in an urban artscape changes and develop.

Urban Artscape – Furesø will have to phases.

The community groups discuss the new possibilities in an augmented urban space (ever citizen can join). In that period from November 19 – December 17 there will be given an example of how to use these new possibilities in an augmented urban space. This will be curated by the poet/artist Jan Hatt-Olsen in cooperation with the culture houses, libraries, the culture department in , the plan department and the juridical advisor. Material from various video artists, other visual artists, sound artists, composers, musicians and poets will in this period be projected and played in the two squares.

The community groups decide for themselves how Urban Artscape – Furesø shall be used and developed, how the cultural codes for living in the augmented reality shall bee.

There will be some control from the authorities during the whole period, not more or less than what is the situation in any urban space in .

Urban Artscape – Furesø is a work of art, which in its essence is a cross-over between urban planning and urban space and street art

It will be a project which to a high degree involves the children the young, the creative class and different ethnical groups because fascination of IT and activity in the virtual space gives them a common ground.

In this case the common ground will be extended to everyone, when we move in an augmented reality in open public spaces, which is placed in the outer physical urban reality. People who don’t have any connection whatsoever with IT and the virtual world will still experience the installation as a fascinating kind of magic realistic world, ready to be discovered.

It will be a work of art in which there will be a other works of art a collage in urban space in flux.

Established artist will be brought together with less established, underground, avant-garde and every kind of creative people.

It will open op for a cooperation of art, culture, business, the municipality.

In phase 1 there will be a suggestion a start of that reality, but in phase two it will be re-enchanted urban places, not form outside controlled urban spaces. 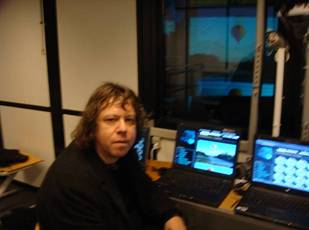 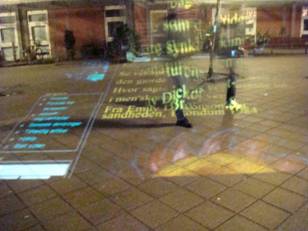 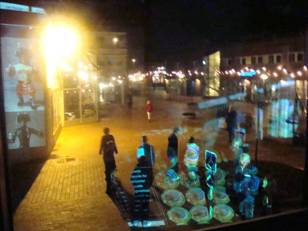 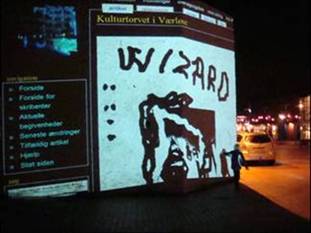 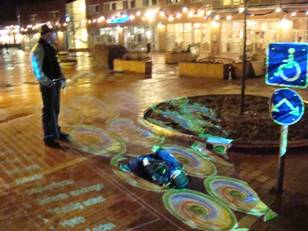 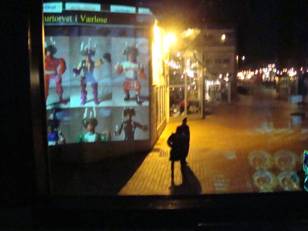 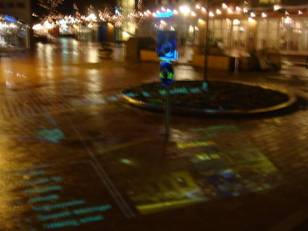 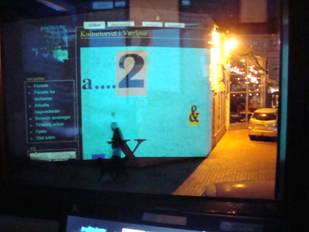 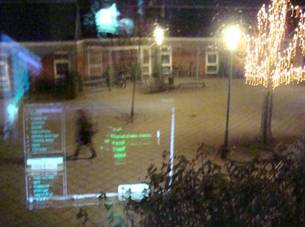 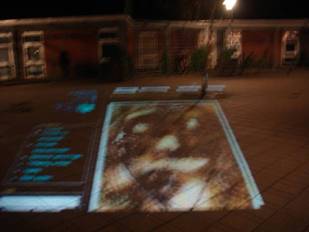 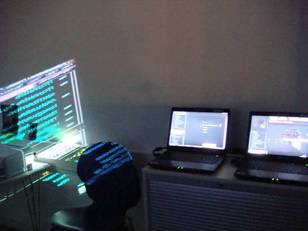 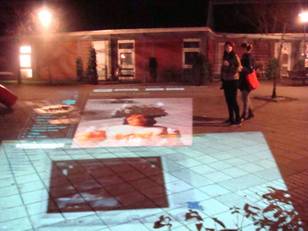 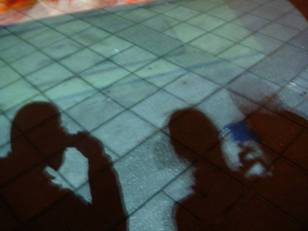 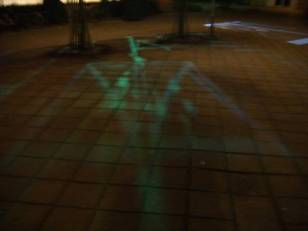 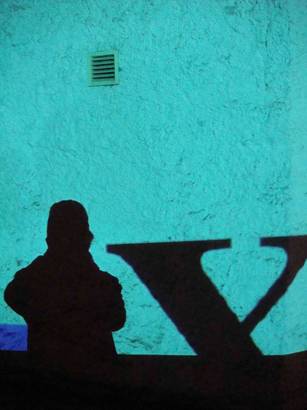